We all have a dash board with an array of buttons – the question is what happens when someone pushes one of them:

Siblings, friends, husbands, wives, leaders and team mates know how to push one another’s buttons.  Depending on our response to our buttons being pushed, determines whether the situation moves to offence and on to conflict. 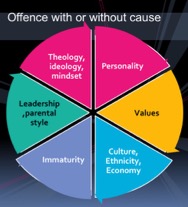 Many conflicts start out as very small issues that grow with time and feeding.   Often, we aren’t aware of differences of personality, values, culture, immaturity, leadership style or theology.  It is going to require us to do some homework, and even when we do have some understanding, we need to stand back from the situation to be objective.  It’s not easy to put ourselves in the other person’s shoes and see things the way they do.  However, this is essential if we hope to come to resolution of our disagreements.

Think about how your buttons have been pushed recently or how you have pushed other’s buttons.  Perhaps there are three basic stages – feeling hurt or hurting others; being offended at someone or offending others; being in conflict with others through disagreement, attack or withdrawal. It is possible to begin on any level. In an instant, a disagreement becomes a two-sided fight with hurt feelings and offence.

While writing this, I am watching four seagulls that are initially sunning themselves on the sand. Then suddenly two start squawking at the other two and a battle is begun, until one party is intimidated and retreats. But no reconciliation or resolution has taken place.  How often does that happen in life?

In my current situation, am I:

An example: Years ago, my wife and I were leading an outreach and we communicated to a couple on the team that we would involve them in the leadership, so they could transition into leading the team as we were only going to be there for half the outreach.

With the pressure of time, we neglected involving this couple in decision making and they felt hurt in the process.  They let it go initially but as the situation continued, hurt can easily move to offence and they felt they needed to speak to us. So, they approached us for a meeting. When they shared, we listened and were immediately aware of our neglect of our promise to them.  As we apologised and asked for forgiveness, there was an immediate release of any offence and the relationship was reconciled.  Over the next week, we sought to resolve the issue by preparing them for their leadership role.

It takes emotional energy to share hurts and offence and it is important that leaders are ready to listen, are humble in their response and careful and wise in the process of reconciliation and resolution.  The situation above could have turned out very differently if we had felt defensive or threatened and not owned up to our failure.

At every stage, we need to be discerning the Lord’s will in terms of letting go of a situation or following it through, having our attitudes right and staying away from any sense of revenge or wanting the other party to suffer in any way. God is able to deal with individuals and bring consequences – that’s not our job.

A few principles I have learned in conflict resolution: